Summary: Mobile devices use touchscreen keyboards that can provide haptic (vibration) and audio feedback. To facilitate future design decisions, I conducted a survey and a user study to measure users' feedback preferences and the effect of feedback modes on typing performance. Feedback mode had no significant effect on entry speed or accuracy. However, survey responses suggest that feedback preference is due to situational factors, rather than performance considerations.

Users and Stakeholders: Users and developers of touchscreen keyboards.

In 2021, there are an estimated 6.4 billion smartphones, and 1.3 billion tablets in use worldwide. Most mobile devices use touchscreen keyboards instead of physical keyboards. Touchscreen keyboards change their layout based on user input and disappear when not needed. To compensate for the lack of tactile feedback they can provide audio feedback (a click) and haptic feedback (vibration).

The prevalence of easily programmable touchscreen devices encourages the development of new keyboards. However, it is important to investigate how feedback affects users. The use of feedback might annoy users, or cause decreased performance. Specifically:

I decided to conduct a user study to investigate users' behaviour regarding feedback modes, and to conduct a survey to explore users' attitude towards them.

I conducted a user study to gauge user behaviour, and determine the effect of feedback modes on mobile text entry performance. Twelve participants (2 identified as female, 10 identified as male) with an age range of 20 to 31 years (mean = 26; SD = 4.1) entered text on a mobile phone. All participants were fluent in English and frequently typed on a touchscreen device. Study sessions typically lasted 20-30 minutes, and each participant received $5 in compensation.

The study employed a within-subjects design, with four conditions: Audio, Vibration (haptic), Both (audio and vibration), and None. The order of testing was counterbalanced using a balanced Latin Square. Each participant entered 30 phrases (5 warm-up, 25 experimental) in each condition, resulting in 1200 (12×25×4) trials for analysis. I used TEMA to administer the study trials and record results. 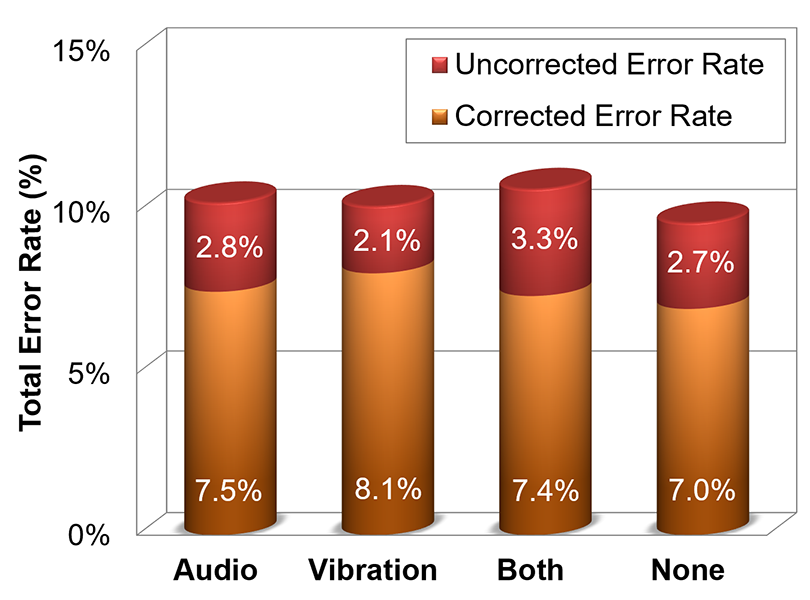 After the study sessions, I asked participants to select the feedback mode they felt resulted in the fastest typing and which resulted in the most accurate typing. This was to investigate whether or not feedback mode had any effect on perceived performance. Half the participants correctly identified their fastest feedback condition, while only a quarter of participants correctly identified their most accurate feedback condition. Thus, there was often a disconnect between actual and perceived performance.

I conducted a survey to poll mobile users on their feedback preferences and attitudes towards feedback modes when typing on touchscreen devices. To reach a large sample of users, I posted the following question on various online forums (e.g., HowardForum and XDA) that cater to mobile phone users:

Smartphones allow feedback when typing. This feedback could be audio (e.g., a "tick" sound from the speaker), vibration (i.e., the device shakes a little), or a combination of the two. What feedback do you prefer when typing (e.g., texting, emailing, etc.)?

Participants were able to select only one of the following responses: "Audio", "Vibration", "Audio and Vibration", or "None". They were also allowed to post comments elaborating on their choice. Although the specific context of text entry was not specified, I assumed that users resist changing their audio or haptic feedback settings based on their environment or situation – they "set it and forget it". This is often demonstrated by phones ringing during movies or presentations.

Of the 92 survey respondents, almost half preferred no audio or haptic feedback at all. Just over one third of respondents opted for only haptic feedback. The margin of error is 9.6% with a confidence level of 95%. 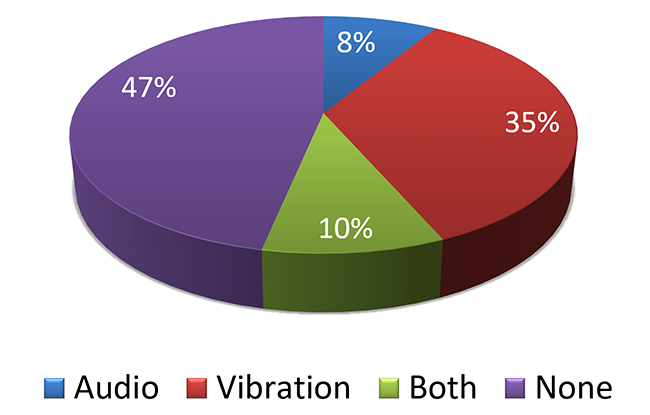 Survey comments suggest that, in social settings, an ethic of reciprocity might also influence a preference for no audio feedback. Some users are bothered by other people's noisy devices. Thus, they choose to disable audio feedback on their own device to avoid disturbing the people around them.

Audio feedback annoys me a little when using it, and it annoys me A LOT when the person next to me is using it!
— Big Ang

i [sic] prefer silence, no audio, no vibration, because audio will influence other people, while vibration will make me uncomfortable.
— jean2012

Others commented that the audio feedback seems unnatural and annoying.

The audio feedback is often annoying; this isn't the nineteenth century anymore [in reference to typewriters?], and often the noises devices choose are silly.
— primetechv2

While most respondents dislike audio feedback, many appreciate having haptic feedback to indicate that input to the mobile device was received.

I activate the haptic feedback, because it give [sic] me a sense that the phone is really typing.
— Felimenta97

Finally, one respondent turns off audio and vibration feedback in an effort to conserve battery power. Though, I do not know how effective this is.

I prefer no audible or haptic feedback what so ever. To me, they are pointless and help eat battery life that I can be better used for programs I use.
— moonzbabysh

The cost to create, evaluate, and deploy new feedback techniques might outweigh the benefit if few users adopt it. Survey comments indicated that other issues, such as power consumption and social etiquette, influence feedback preferences. Mobile keyboard developers should at least provide the option of having simple haptic feedback, but not with the expectation that it will necessarily affect typing performance.